What is Bird Week in Vancouver?

Where is the event held?

Bird Week is held in and around the City of Vancouver, the premier birding location in Canada. The EVENT LISTING page has more details about event times and locations. 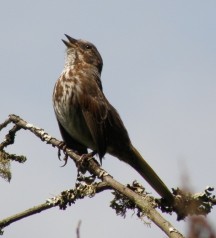 What is the purpose of Bird Week in Vancouver?

Bird Week is the outreach campaign of the Bird Agenda for the City that aims to conserve birds and their habitats. Vancouver is within the premier bird habitats in Canada.

Where can I find out more about birds around Vancouver?

Where can I find hotspots for birding in Vancouver?

Vancouver offers birders a dynamic range of bird watching opportunities both in terms of species and habitats in which to find them. This map of birding hotspots – researched and developed by City Studio students in 2012 – highlights many of Vancouver’s natural gems with some of its best scenery. The locations on the map include a list of notable species that have been sighted there.
Click for printable map 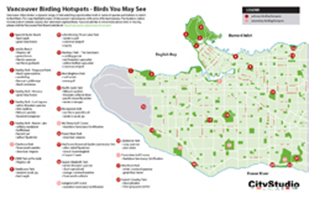 What is special about birds in Vancouver?

With its diversity of habitats and its maritime climate, the region boasts a myriad of designations including the premier Important Bird Area in Canada, Hemisphere Reserve for shorebirds, Wetland of International Importance, and often has the greatest number of species on Christmas Bird Counts in Canada.

Will the bird walks be led by professional guides?

Guides include some of the best birders in Vancouver some of which have guided bird tours in other parts of the world. All guides donate their time to help show you the best places to see birds around Vancouver.

Why is Bird Week held in May?

Originally, we celebrated World Migratory Bird Day which is globally acknowledged on a specific day in May (we still do!) but, quite simply, all of May is a great time for birding in Vancouver. May coincides with when the last of the winter resident birds are still around and when the peak of the spring migration is in full swing. ‘Fallouts’ – when songbirds are halted by stormy weather – rarely occur in Vancouver.  But waves of migrants occur each spring. On the mudflats of the Fraser River, hundreds of thousands of shorebirds stop in late April and the first few days of May.  Check tide tables for Tsawwassen and plan to arrive before an approximate ten foot tide. 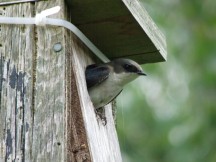 Where are birding areas accessible to wheelchairs?

See the events listing page for details on locations of each event.

Where are the evening presentations held?

All talks will be held at the Main Branch of the Vancouver Library, 350 W Georgia St  in the Alma VanDusen & Peter Kaye Rooms on the Lower Level of the main concourse.

Do I need to be an expert birder to attend the bird walks?

Not at all. All levels of birders are invited to attend. Our guides will help you use binoculars and bird guides, and to locate the birds. We also will hold a beginners’ workshop to help get you on your way. We find that beginners often are well on their way to becoming good birders after a few walks with the pros.

Are these events for families or only adults?

Many birders get their start as children or teens so of course families are welcome. We ask that all children be accompanied by a parent or guardian.

Do I need to pre-register?

The bird walks and evening events are open and free for all, but please come early to reserve a spot in case they fill up.

Where can I find more resources on birding in BC?

How did WMBD become an annual event in Vancouver?

In 2010, former Park Board Commissioner Loretta Woodcock thought that Vancouver should celebrate its birdlife by participating in World Migratory Bird Day.  Here is her story: 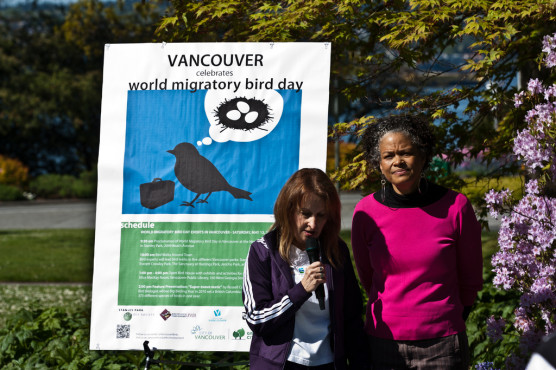 “As a young child, the roots of my love affair with birds began with living beside a large wooded area adjacent to my house in Mississauga, Ontario. I recall that when I learned to read I then joined the Audubon Society to learn more about the birds that came to rest and nest in the forest behind my house. I followed the lives of birds until I got a job and became really busy.

Fast forward to a May 8, 2010 newspaper story entitled “A winged tsunami: millions of birds are passing over Metro on their annual migration north. One of nature’s greatest spectacles is happening all around us, yet we don’t really notice”. I was astounded that an estimated 3 billion birds fly from their wintering grounds as far south as Argentina to their breeding grounds in Canada and Alaska. Few people, myself included, are or were aware of this.

Upon further research, I discovered that BC is home to nearly 500 bird species, of which Metro Vancouver, including the City of Vancouver, supports 412 species, many of which are migratory. Vancouver has some of Canada’s most important bird habitat including English Bay and Burrard Inlet. This was something worth celebrating and supporting.

Vancouver City has a Green Action Plan and the Vancouver Park Board is the curator of over 200 parks and 140,000 urban trees. Migratory bird paths include more prominent green spaces such as Stanley Park, Queen Elizabeth, Everett Crowley and Hastings Park. This created the perfect ‘political habitat’ to welcome birds into our community parks.”

Migratory Bird Day is a United Nations initiative that takes place annually in mid May. It recognizes the importance of birds as key indicators of the health of the environment. Worldwide celebrations join people of all ages and from many nations together to celebrate birds. It was time that the City of Vancouver joined this international movement and hosted this annual event.

On May 16, 2011 the Park Board passed a motion that directed staff to research the feasibility of mapping important bird migration, feeding, resting and nesting areas within the City of Vancouver with the goal of applying this information to the city’s tree planting and park redevelopment programs. The goal was to attract and sustain habitat for migratory birds, for their food, nesting and shelter. The strategy would be incorporated into the City’s Urban Forest Management Plan. World Migratory Bird Day was born in Vancouver.

In 2012, World Migratory Bird Day was once again proclaimed and walks were held.   In advance of spring 2013, Deputy City Manager Sadhu Johnston, who was instrumental in a Bird Agenda program in Chicago, brought together the event partners to continue to develop the initiative into a more robust bird agenda. The partnership direction has evolved to develop a conservation and restoration program for the city and to celebrate birds with a week-long event.

Over 150 participants came out to celebrate World Migratory Bird Day events across Vancouver in 2012. The day started at the heron colony in Stanley Park where Park Board chair Constance Barnes and past commissioner Loretta Woodcock read the City of Vancouver’s official proclamation of World Migratory Bird Day. West End MLA Spencer Chandra-Herbert said a few words in support of bird conservation and George Clulow, a representative of Bird Studies Canada, put the day in context before leading a group of community members on a bird walk around the park. 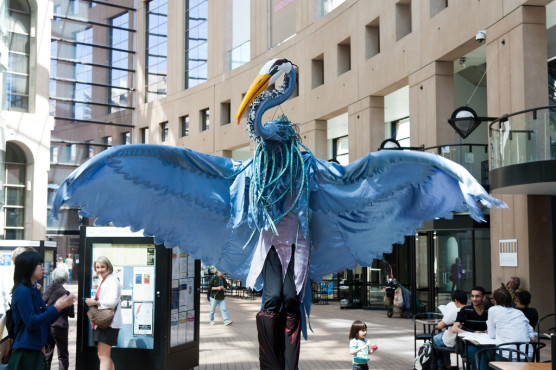 Bird walks were held around the city by Nature Vancouver and SPES bird experts. SPES volunteers tracked the number and species of birds recorded to add to a results display created by City Studio students. There were about 120 people who attended in total and many different species of migratory birds were observed.

Everyone met back at the main branch of the Vancouver Public Library in the afternoon where displays were set up by a variety of community groups. OWL raptor rehab brought a few live animals to show, SPES had a bird feeder making activity, and the Young Naturalist Club brought activities for kids. The Beatty Biodiversity Museum brought stuffed animals for people to examine and a giant great blue heron directed passers-by from the library atrium down to the event. It was hard to bring people in from outside on such as lovely spring day, but several kids (and adults) left with lots of give aways and good information about birds.

The afternoon was rounded out by an engaging presentation by birder Russell Cannings who told the group about his “big birding year” while poking fun at his fellow birders. The day ended with prizes being won by those in attendance.