Was that a coyote?

A year in the life of a coyote (Canis latrans)

Was that a coyote?

Did you see a dog run past without an owner? Here are some quick tips for identifying a coyote: 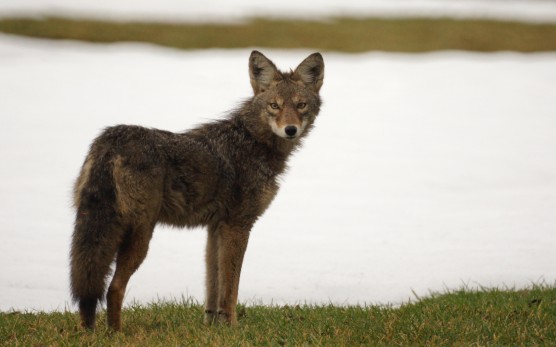 Coyotes are often mistaken for wolves, however, an adult wolf is actually more than twice or even three times the size of an adult coyote. Coyotes in eastern North America are actually significantly larger than their western cousins as they researchers theorize they started interbreeding with wolves in the early 1900’s, creating the “Coy-wolf.”

A year in the life of a coyote

• The female digs a den or finds a pre-existing one. Dens are usually well hidden either behind dense vegetation or abandoned structures. Dens are only used for pup-rearing. All other times of year coyotes will take shelter in undisturbed areas

• Pups are born in April. Litter sizes are usually 4-7 pups but can change drastically depending on available food sources and territory / size of the pack

• Most urban coyotes will not survive their first year due to competition, disease, or, most commonly, vehicle-related deaths

• Though about half live in family groups, rarely will more than one or two coyotes be seen together at once as they tend to hunt and travel alone or in pairs

Within one year a coyote will be full grown, and is able to mate in the second year of its life, though this is highly unlikely because of the complex family structures

You might be surprised to learn that coyotes did not arrive in Metro Vancouver until the 1930’s and even later in the City of Vancouver in the 1980’s. Why? Well, before European settlement, coyotes were native only to the deserts and grasslands of the Midwest United States. Following increasing agricultural and urban development, combined with the wide-spread destruction of wolves (a natural predator and controller of coyote populations), coyotes had spread to most parts of North America by the mid-20th century . Like grasslands and deserts, our urbanized and cultivated areas have lots of open space and food sources for coyotes, most especially rodents. Considered one of the most adaptable wild animals, coyotes now inhabit almost any terrestrial environment in North America.

Coyotes primarily eat mice, squirrels and rabbits (80% of their diet), but will take almost anything they can get a hold of. If available, they will eat fish, fruit, berries, nuts, eggs, and garbage. They have been known to prey on cats and small dogs, although this accounts for only 1-2% of an urban coyote’s diet.

Find out how to keep your pet safe, or make your backyard and neighbourhood safe from coyotes by learning How to Co-Exist with coyotes.

• Throw and scatter their voices with ease. They are known as one of the most vocal wild animals in North America

Coyotes are naturally active during the day and night. You might think they are nocturnal, but they have adapted their behaviour in cities to avoid humans in the day time and will do most of their hunting and travelling at night or during twilight. Have you seen a coyote in the daytime? Please report it using our online report form, or call our info-line 604-681- WILD (9453).

The coyote is a prominent character in Native American and First Nation’s storytelling. Commonly portrayed as a trickster, Coyote often gets into mischief with spirits, humans and other animals.