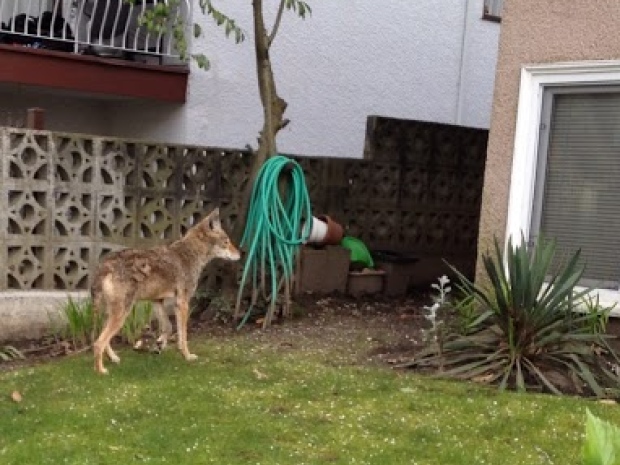 Hunter says the service received three calls about the animal Saturday in addition to other reports of it approaching residents and their pets in the False Creek area during the past month.

It’s not uncommon to see coyotes in Vancouver, According to theStanley Park Ecology Society, which runs a program called Co-existing with Coyotes, up to 200 of the animals live within the city.

Barker — who works as a hospital lab technician — had taken her two dogs, Bela and Tony, out for a walk early in the morning last week near Granville Island when they began barking loudly.

She looked up to see what she thought was a stray dog, only to realize that it was in fact a coyote. 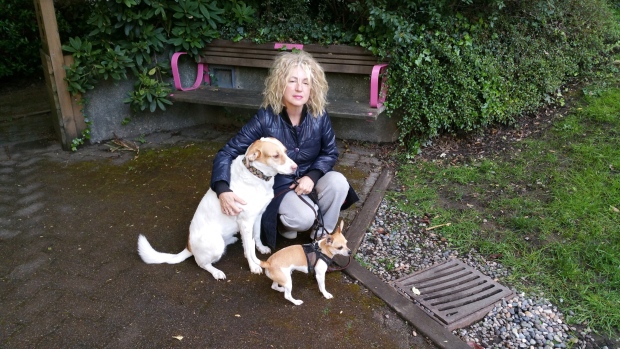 False Creek resident Hanna Barker with her dogs Bela and Tony in the spot where she encountered a coyote which she says terrified her. (Hanna Barker)

“And it was coming straight towards me so I start pulling my dog away and I didn’t know what to do because it was just staring at me and walking slowly towards me.”

Both her dogs continued to bark and pull on their leashes towards the coyote, Barker struggled to pull them back, all while the coyote continued to advance.

Finally she scooped her small dog, Tony, into her arms, fearing the coyote was hunting him.

“And I thought if he’s going to jump in my face, because I’m holding him in my arms, he’s just going to damage my face or bite me or scratch me or something,” she said. “It’s a wild animal so I was like shaking so horribly. I couldn’t move, I couldn’t even scream. I couldn’t get my voice out. I just said, ‘get away, get away.'”

Barker ran back to her residence, pulling her dogs along with her.

“And that animal chased me, chased me to the stairs, so I ran. When I got to my door I looked to see if he there and he wasn’t,” she said “I couldn’t even function. I couldn’t stand on my legs. I just sat down and I was just terrified and since then I can not go in the morning, My husband takes them in the morning.”

Barker is not the only one who has seen at least one coyote coming in a little too close.

Barker’s neighbour, Jane Davis says she only goes out now with her dog while carrying a stick.

“I’m getting a little paranoid about coyotes,” she said. “They come out quick.”

The Stanley Park Ecology Society, which collects reported coyote sightings and maps them on a web site, says it had been aware of the animal, has now been killed, for some time.

“We’ve actually heard a lot about the situation with a couple of coyotes that are actually mates in the Granville Island area and the Olympic Village area,” said Dan Straker, who is the urban wildlife coordinator for the Stanley Park Ecology Society.

He’d been tracking the pair since June of last year, when Straker says someone was feeding one of the coyotes where Nelson Street connects to the park.

He says 99 per cent of human-coyote interactions are due to someone feeding one of the animals.

“We are very aware of the situation and we’re very concerned as well,” he said. “We know that this is not normal coyote behaviour, this is the kind of behaviour we see when a coyote has been fed by people and and it becoming much too comfortable.”

The Ministry of Environment gets involved to to remove or kill a coyote when it can prove there is aggressive and threatening behaviour such as stalking, pursuing or lying in wait.

After a flurry of reports about the coyote Barker encountered face-to-face, the animal went unnoticed until Saturday, when the Ministry of Environment’s was alerted to more confrontations with residents.

In urban settings coyotes eat mostly rodents, but small pets like cats contribute up to two per cent of their diet.

Straker says on average, one coyote each year is destroyed because of aggressive behaviour, but that co-existing with the animals is the best approach as culling or poisoning usually does nothing to reduce their numbers.

A recent study shows that the majority of Vancouver residents have a positive attitude about coyotes in the city.

The Stanley Park Ecology Society asks that residents try and scare coyotes away with loud noises when they see them and also report sightings on its web site.