The restoration of habitat and ecological processes in Stanley Park is an important aspect of SPES’s stewardship programs. This is particularly true when managing invasive species, improving environmental conditions, mitigating degradation, and improving habitat conditions for particular species.

To restore habitat we often begin by removing invasive plants and replant with native species. Invasive removal is beneficial but it can result in a loss of biomass and disturbance to soils. By planting native species on these sites, we aim to prevent erosion and produce high quality habitat. The plants we use are either salvaged from areas where they may be destroyed, propagated in SPES’s dedicated nursery, or donated by the Vancouver Park Board and other organizations. 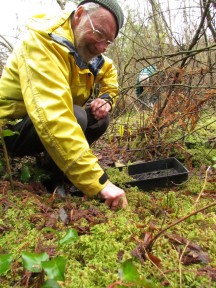 Hidden from the public’s view off the trail around Beaver Lake lies the Stanley Park bog. This rare habitat is home to sphagnum moss, bog laurel, Labrador tea and the carnivorous round-leaved sundew plant. Alterations to the hydrology in the Beaver Lake watershed over the past 90 years have reduced this threatened habitat to only a fragment of its former size and nearly resulted in the loss of several rare local species.

Restoration work officially began in the summer of 2011 and now the bog is in the process of returning to its former glory. Volunteers, community groups and local academic institutions have assisted SPES in the restoration through vegetation mapping, removing invading terrestrial plants, exposing the underlying peat, and planting native bog species. Today, the bog is well on its way to returning to a functioning ecosystem – adding to the biological diversity and integrity of Stanley Park. 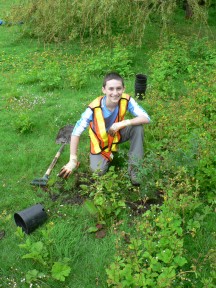 Invasive plant and animal species have had devastating impacts on the native ecology of many natural areas and is one of the greatest threats to biodiversity in our world today. In Stanley Park there are 72 non-native, invasive plant species. Our habitat restoration programs aim to repair habitat damaged by these species.

Learn more about invasive species management in the Park and watch a video about our Creative Upcycling project that has transformed invasive plant waste into products that support habitat restoration in the Park.

When managing invasive species, there can be many challenging biological, social, environmental and safety aspects involved. To help overcome such challenges and ensure the most appropriate stewardship of Stanley Park, SPES uses Best Management Practices (BMPs), which include the following:

•         Site selection based on species, time of year, and removal techniques, also considers consideration of wildlife and habitat values and safety concerns

•         Education and in-the-field training for volunteers

•         Manual removal as the primary technique used for most target species

•         Evaluation and tracking for all restoration sites including documenting the volume and area of invasive species removed, amount of garbage removed and other valuable information

•         Monitoring and maintenance of all sites to prevent invasive species regrowth and to ensure our work (including plantings) is successful.

Habitat fragmentation – caused by interrupting trail networks, roads and developed areas – has had negative impacts on Stanley Park’s ecosystem’s function and biodiversity. Small, isolated patches of habitat are more vulnerable to disturbance and are often unable to support viable populations of many plant and animal species whose spread and movements are disrupted. This especially affects the dispersal of plant spores, pollen and seeds, and the movement of small mammals, amphibians, invertebrates and breeding forest birds. Other negative effects of fragmentation include changes in microclimate and species composition, loss of gene flow resulting in inbreeding, increased competition and predation, and degradation of the existing habitat due to edge effects and exotic species invasions.

Current SPES restoration projects aim to repair long-term viability and resilience of remaining forest fragments in Stanley Park by conducting restoration and enhancement work in fragment areas and by rehabilitating unsanctioned trails. Park staff are also working to restore connectivity in the park through the implementation of the Stanley Park Ecological Action Plan and by decommissioning unsanctioned trails as a part of routine forest maintenance activities.