People are peeking into the nests of Stanley Park’s heron colony with the help of the Park Board’s new heron cam installed on a nearby building. Since mid March, over 80,000 camera views have been privy to the dramas unfolding in 41 nests of the 84 nest colony (that’s approximately 200 fuzzy heron chicks!). To try the webcam yourself, visit http://vancouver.ca/parks-recreation-culture/heron-cam.aspx.

Most of the chicks in the colony are getting large enough so that they no longer need to be brooded (sat on) by the adult herons. This makes them particularly vulnerable, though, to predators and the elements. 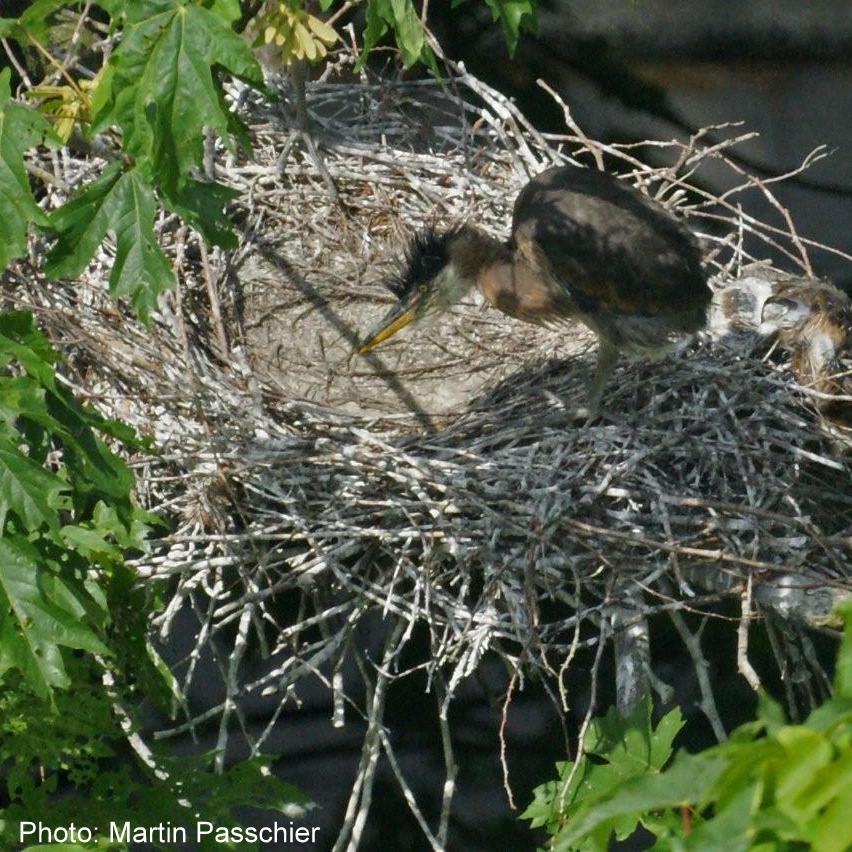 Some eagle attacks were documented in April. Eagles will take both eggs and chicks from the nest. It is likely nest E1 lost its chick in the latest attacks. (You can view a map of the nests in our April Heronry Update at http://stanleyparkecology.ca/wp-content/uploads/downloads/2015/04/April-2015-Heron-Update.pdf .) 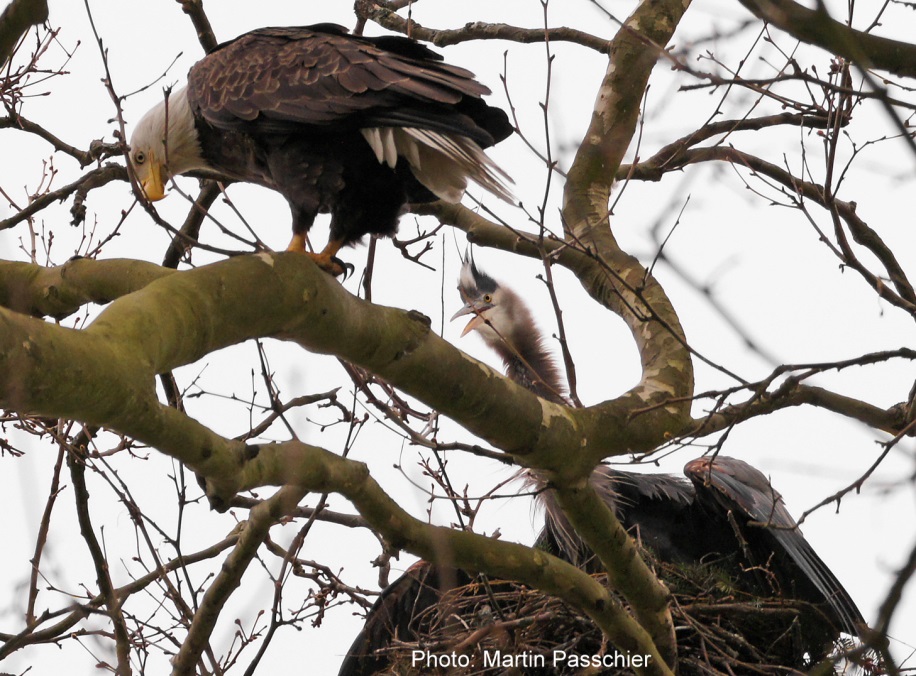 Most nests start out with 3-4 chicks but only end up with 1-2 by the end of the season. Predators are the least of the chicks’ worries, though. Weaker chicks often starve due to sibling dominance or may be actively killed or pushed out of the nest by siblings. Nest B3 has five, five-week old chicks as of May 15, 2015. These are the oldest chicks in the colony and can be seen beginning to perch on the edge of the nest. Both parents must be away from the nest to bring enough food. We’ll see if all five chicks survive to leave the nest by September. 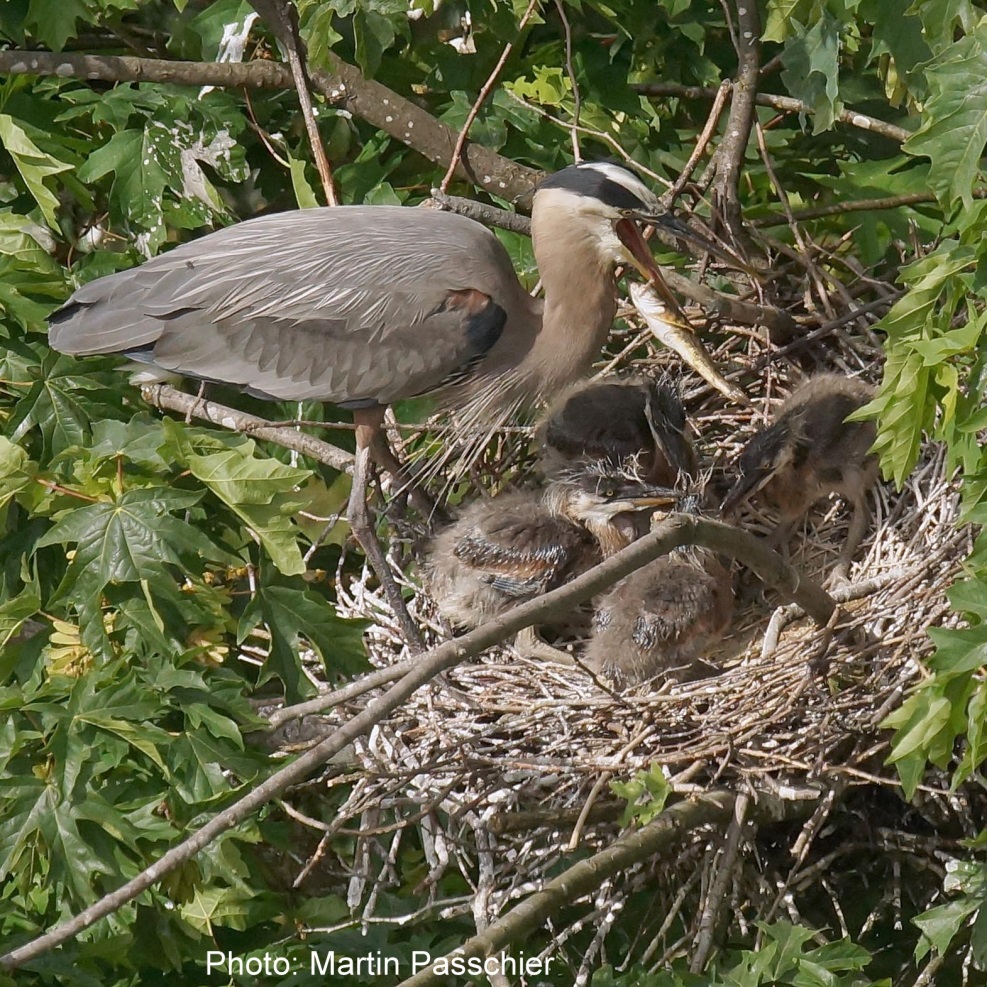 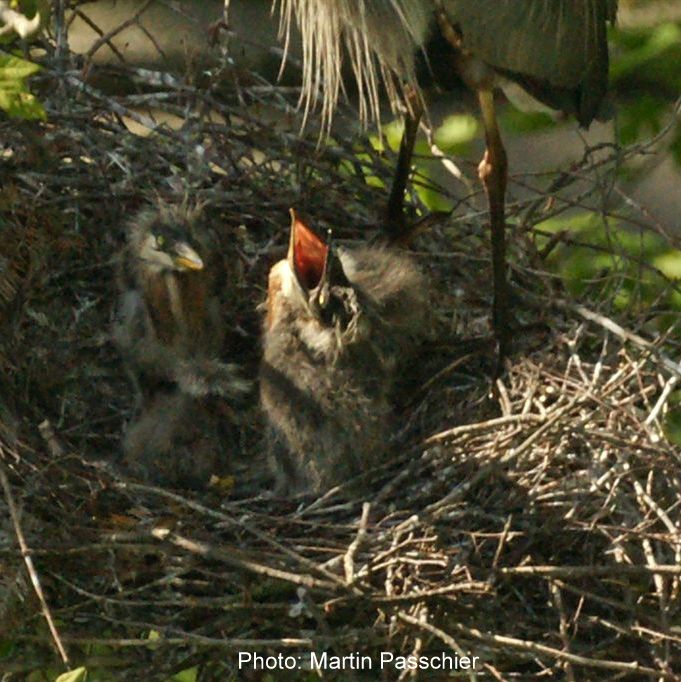 Feeding time for chicks is a flurry of activity as fights between siblings break out and loud squawking fills the air. During the breeding season they mostly eat small fish. The chicks are fed at the nest for about 60 days. Both adults feed the young by regurgitating directly into the chicks’ open beaks or dropping fish into the nest. Chicks grow rapidly, gaining almost 40 times their weight in eight weeks, from approximately 50 g at birth to 2 kg at fledging.