Stanley Park’s heron colony is noisy enough, but the herons’ croaking squawks escalate to a veritable cacophony when an eagle glides in. Eagles are the chief predators of the heron chicks which fall prey to the eagles’ talons every season. 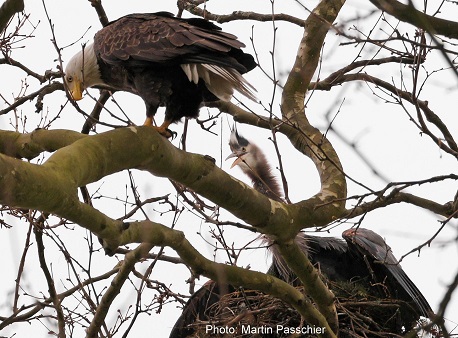 A bald eagle calling from a lofty perch has become a familiar sight in Vancouver – if you know where to look. These magnificent birds of prey have adapted very well to our urban environment with 22 bald eagle nests present within the City of Vancouver, five of those right here in Stanley Park.

Bald eagles begin courting in February (right around Valentine’s Day), and lay their eggs around the end of March. The first chicks hatch in the first or second week of May, and throughout June and July careful observers may be able to hear peeps from the eaglets, or perhaps with a good pair of binoculars you might observe chicks sitting on the edge of their giant nest, flapping their wings, and eventually graduating to jumping and hopping. By the end of July (85 days after hatching) eaglets around Vancouver will take their first flight. Once they leave the nest for good they are considered fledglings, but these eagles will remain juveniles until they get their adult plumage about five years later. Eagles must spend this four or five year period honing their hunting and survival skills. Juvenile bald eagles are a mottled brown colour; once they get their white head and tail, they are mature and ready for eagle dating! 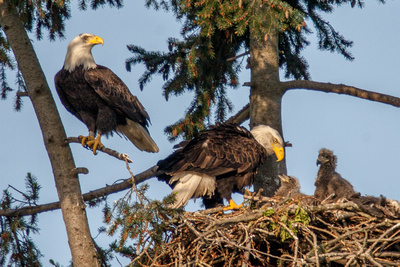 It’s interesting to note that juvenile eagles are generally larger and heavier than adults. This is due to the expanded vascular system in juveniles (extra veins and arteries) especially in their wings, a feature which is necessary for their developing bodies. Once eagles reach maturity, their extra veins and arteries atrophy and, as a result, the birds become smaller and lighter.

Bald eagles are generally fish eaters, but here in Stanley Park and in the rest of Greater Vancouver their diets consist mostly of other birds (85%) with mammals, fish and invertebrates making up the remainder. This irregular diet choice and city lifestyle seems to be working for them, however, because Greater Vancouver eagles were found (in 2009) to have the highest nest success and productivity in North America. Last year Vancouver’s nests produced 15 fledglings, with four of those coming from Stanley Park nests (Merilees trail and Cathedral nests). 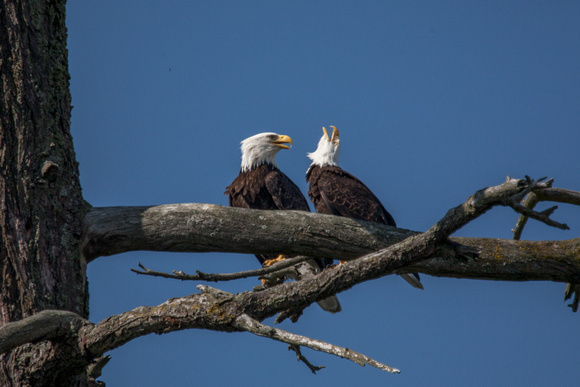 Our resident bald eagles have so many stories to tell, and any way you look at it, we are just lucky to be able to share our city and parks with these magnificent birds of prey. We hope to hear their calls around Stanley Park and Vancouver for a long time to come.

SPES has monitored bald eagle nests throughout Vancouver since 2004. For a detailed eagle report and a map of Vancouver’s bald eagle nests, click on http://stanleyparkecology.ca/wp-content/uploads/downloads/2015/01/Eagle-Report-2014-Final.pdf .