After the Oil Spill

Stanley Park in the Wake of the English Bay Oil Spill

On April 8, 2015, Bunker C fuel spilled into Vancouver’s English Bay from the new bulk grain carrier M/V Marathassa. The ship’s fuel ultimately oiled beaches from Stanley Park to West Vancouver with some evidence of oil showing up in Burrard Inlet at New Brighton Park. The local sailor who reported the spill described seeing thousands of blobs of oil ranging from “pea size” to “fist size” floating below the ocean surface.

Twelve hours after the first sighting of oil, containment and clean up began. The Coast Guard asserted that with surface skimmers, booms and absorbent pads “80 per cent of the spill was not only contained, but was recovered within 36 hours”. ¹ However, Bunker C oil is a very heavy oil; it sinks, leaving only a fraction of the spill on the beaches and the ocean surface. According to US oil spill response expert and former oil and gas industry professional, Anita M. Burke, less than 30% of the oil spilled in ANY oil spill has ever been recovered.²

How much oil was actually spilled and recovered since April 8 therefore remains unclear, as does the spill’s impact on the harbour’s ecosystem and Stanley Park’s fragile intertidal zones. 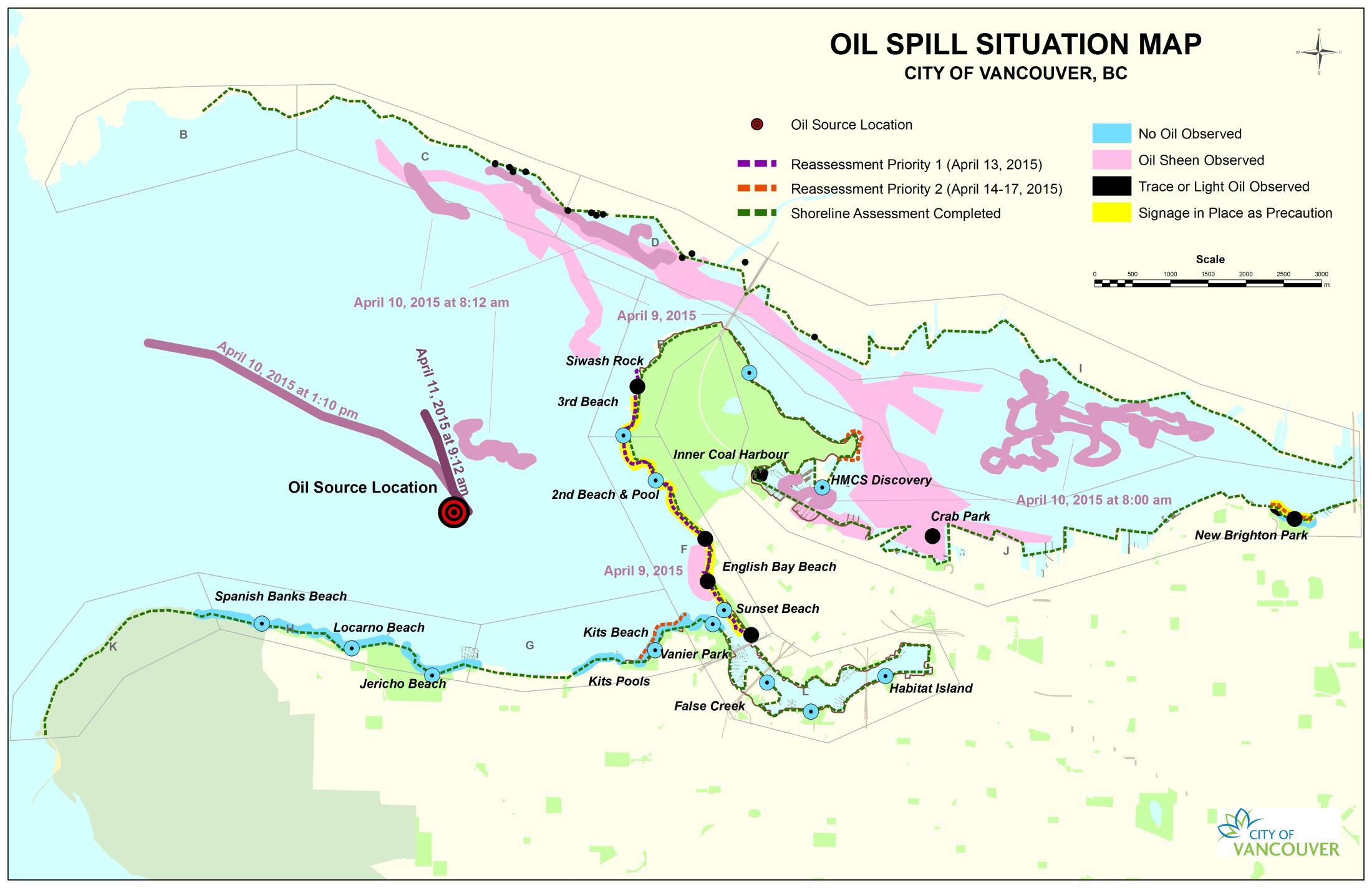 Distribution of oil from April 8, 2015 oil spill in English Bay (map provided by City of Vancouver)

Compared to catastrophic tanker spills like the 1989 Exxon Valdez disaster, Vancouver’s recent oil spill was almost diminutive in size. An estimated 2700 to 5000 litres7 of Bunker C oil spilled into the harbour – a drop in the bucket beside the Exxon Valdez’s loss of 11 to 38 million US gallons (41 to 144 million litres) of crude oil. But even small quantities of the highly toxic Bunker C oil may seriously impact the harbour ecosystem. According to NOAA (the National Oceanic and Atmospheric Administration), very heavy oils like Bunker C can persist in the environment for months or even years. In the short term, these heavy oils smother marine organisms while the long term effects of toxicity may cause tumours and chronic health problems in some organisms. Twenty six years later, the herring population in Valdez, for example, has yet to recover. 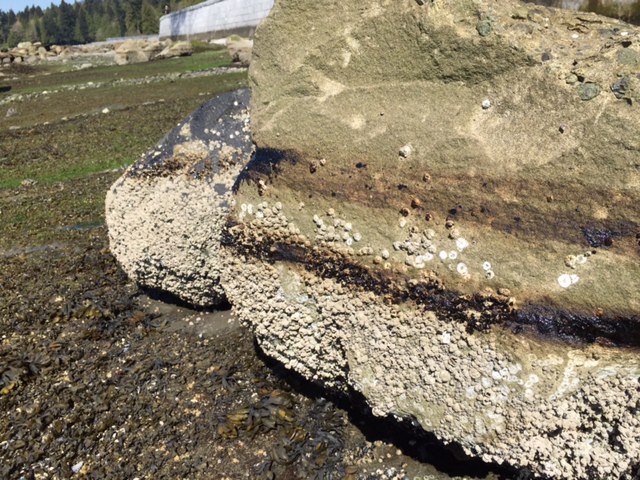 Intertidal habitats are especially vulnerable to an oil spill. In Stanley Park, the zone between high and low tide stretches nearly nine kilometers across rocky, cobble and sand beaches supporting a food web of bacteria and protozoa, plankton, sponges, worms, seaweeds (including extensive kelp forests), crustaceans, mollusks, and fish . The Park’s great blue herons, eagles, river otters, shore birds and sea ducks are all a part of this web. On the western shoreline by Siwash Rock, mussel beds provide food for a globally significant population of wintering Barrow’s Goldeneye and thousands of blue-listed Surf Scoters. An oil spill several kilometers away from Stanley Park could devastate local bird populations like these. The oil not only mats the birds’ feathers exposing them to hypothermia, but smothers and poisons the fragile food web on which they, and all the intertidal life, depend. 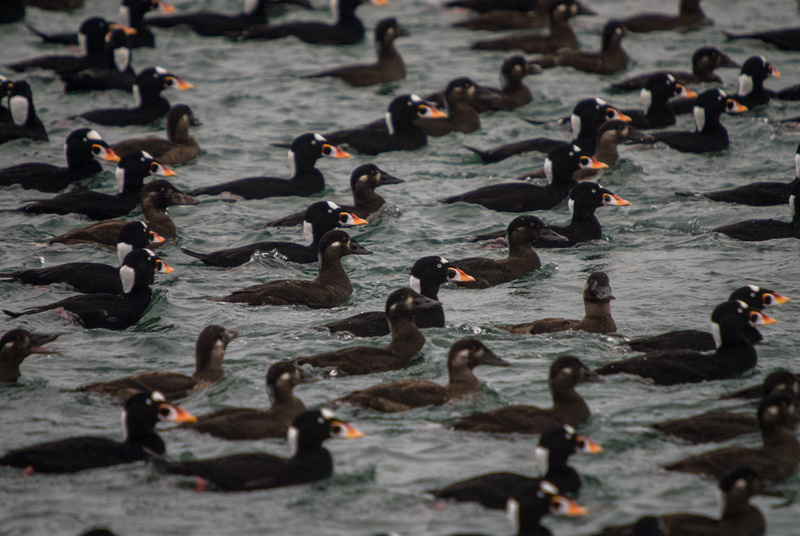 Any effects of the April 8 oil spill on Stanley Park’s shoreline ecosystem may not manifest themselves for some time as the toxins from the Bunker C oil work their way through the food web. In order to recognize any negative impacts on the shoreline ecosystem, we must first understand what a healthy intertidal system looks like. But, to date no thorough surveys of the Park’s intertidal and subtidal zones have been conducted. This baseline information would enable us track the health of the ecosystem over time and recognize any negative impacts resulting from an oil spill or other environmental disaster.

“The fuel spill highlights the need for long-term monitoring of [coastal] ecosystems, which doesn’t currently take place,” observes the Vancouver Aquarium.³ A year ago, Dr. Peter Ross founded the Vancouver Aquarium’s Coastal Ocean Research Institute to conduct studies and gather information about BC’s coastal environments which “… will establish a baseline for ocean health and allow us to track pollutants.”4 The Canadian Coast Guard states that it will also “…oversee and implement a number of long-term monitoring programs following the M/V Marathassa fuel spill in English Bay… [and continue] the environmental assessment and sampling program….” (As a precautionary measure against contamination in the inter- and sub-tidal zones, the Coast Guard closed the recreational fishery in English Bay. Sediment and Starry flounder, dungeness and red rock crab, and mussel sampling is ongoing.)5

The reality is 26 years after the devastating Exxon Valdez spill, oil spill knowledge and clean up technologies have advanced little. Today’s unconventional oils, like Bitumen and the Bunker C fuel spilled into English Bay, are non-buoyant. Traditional surface-focused oil spill response is, in most cases, ineffective against these highly toxic, heavy, viscous oils. The devastation Vancouver’s harbour and Stanley Park could face in the wake of a more substantial oil spill is immense. In an oil port, Anita M. Burke believes it is inevitable.6

What is Bunker C fuel? http://www.theweathernetwork.com/news/articles/the-science-behind-the-spill-what-is-bunker-fuel-and-its-environmental-impacts/48998/