Windstorm brews up some environmental benefits 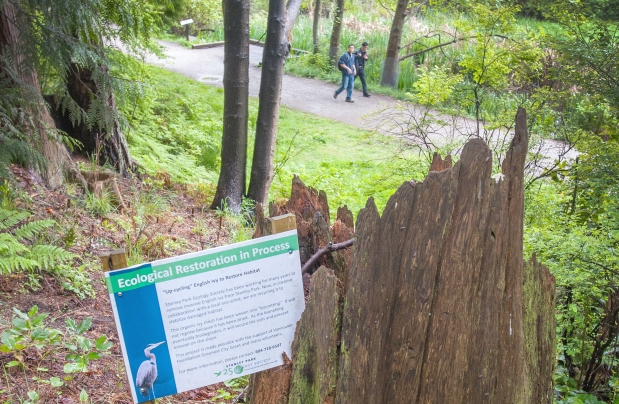 Ten thousand trees were knocked down in Stanley Park during a devastating windstorm in 2006.

Invasive, non-native plants flourished in wake of the big blowdown. The 500 volunteers in the Stanley Park Ecology Society (SPES) have been diligently working with Vancouver park board staff to uproot the invaders and replace them with native plants.

But it costs money. And Monday, they got some from the Stanley Park Brewing company, which donated $20,000 to SPES.

The donation comes from a pale ale called Windstorm, named after the natural disaster in 2006.

“We introduced this new beer as a limited edition offering where partial proceeds from every sale are being donated directly back to the Stanley Park Ecology Society,” said Jim Lister of the Stanley Park Brewing company at a press conference in the park Monday.

Here are five ways the Stanley Park Ecology Society will use the money in the park, as related by SPES executive director Patricia Thomson:

1) Get rid of invasive species

“We definitely have an ongoing need to remove invasive, non-native plants from Stanley Park,” said Thomson.

“Many of these species have been here in the park for decades. They were introduced because they are lovely to look at, and people didn’t understand at the time how aggressively they would grow.

“These plants have no natural predators (here), so they have an advantage, and they take over the habitat and the food sources that are necessary for ecological integrity, the wildlife nesting areas, food sources.”

“We need to do some restoration work (after) the removal of larger patches of invasives. We (do) restoration work with native plants, (which we grow) in our own simple little nursery in the heart of the park, in the service yard.

“Good ones to replace the bad ones are salal, salmonberry and red osier dogwood.

“In areas where we’re removing invasive plants, it leaves the soil exposed to erosion from the rains. We are having to plant replacement plants there.

“This is an exciting story, where we’re actually using some of the biowaste of the removed invasive plants, like English ivy (for slope stabilization).

“We have been working with an environmental artist, Sharon Kallis, on a technique where we can weave this removed ivy into large matts, like big quilts, if you will.

“We leave it to rest for a number of months, so we know that it’s not (growing), and then we can use that somewhat like a landscaping cloth to set back on exposed vulnerable slope areas.”

4) Fragmentation of the forest

“The forest has been cut innumerable ways by roads and trails and, in this case, by unsanctioned trails, where people have been off the official trails, either by bike or foot.

“It impacts the forest floor by compacting it and pressing back the plants. It makes it difficult for wildlife, small wildlife, to safely cross these areas.

“We’ve been going in, removing the invasive plants and replanting with native plants to try to smooth out those unsanctioned trails.”

“We need to educate (people) on the hazards of invasive plants, not only in Stanley Park but throughout the whole Lower Mainland region.

“How do we effectively remove them, in an ecologically safe manner, and make that safe for humans, too? There are some invasive plants that are really quite toxic for people to handle.

“The giant hogweed needs to be removed by trained professionals who are fully clad in protective outfits, including eye-goggles. It’s a very tall plant, and it’s got a very big umbrella of white flowers. Very large, very showy flower heads. West Vancouver struggles with a lot of that.”