Blue Herons are busy as they court and build nests in Vancouver’s Stanley Park.   Photograph By Ward Perrin 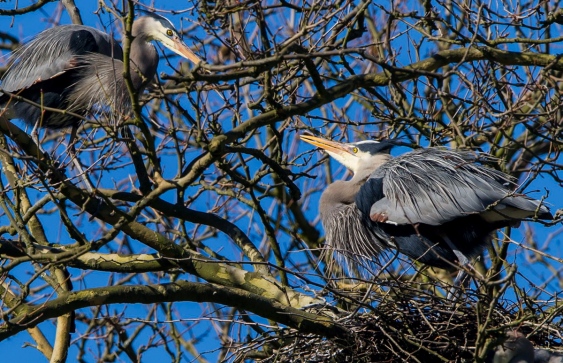 VANCOUVER – It’s supposed to be a private encounter, but all eyes are on the screen as the long-legged heron swoops into the scene and proffers a classic token of desire: a stick.

The crowd titters, but the live-on-air show is fully G-rated.

Ecologists have mounted wireless cameras in Vancouver’s Stanley Park, transporting the public straight into the nests of the region’s Pacific great blue heron. With it comes some intimate close-ups.

“Oh! We have some interesting behaviour happening. Right on schedule — that’s heron mating behaviour,” said biologist Robyn Worcester, as she interpreted the streaming video for reporters on Wednesday.

“It’s kind of hard to imagine how it’s possible. A lot of people say, how do they do it? They’re so tall!”

Courtship between the striking birds is just a sample of the featured viewing now available online, along with nest building, egg laying and the spring hatching of chicks.

Around 90 nests have become active since the herons returned in February, and about two chicks per pairing are expected to start cracking their shells in April, said Worcester, who is with the Stanley Park Ecology Society.

The park is home to one of North America’s largest urban heron colonies.

The Vancouver Park Board installed the remotely controlled cameras on the roof of a nearby building, making it possible for the public to take turns switching camera angles. It cost $25,000 to start the project.

“Any time you engage people in nature, they’re more protective of it,” said board chairman John Coupar.

He’s not concerned that the opportunity to watch over the web will prevent people from visiting the park for unimpeded views of the birds.

But Worcester admitted cameras may become obstructed. As spring blooms, leaves will fill in on some of the tall trees that host the heron colony, a mixture of indigenous big-leaf maples, London planetrees and oaks.

She said she’s observed the area’s herons for a decade, but has learned more than she thought possible simply by watching through the cameras over the past two weeks.

The herons of Stanley Park established their colony in 2001, and they make up a significant portion of the B.C. population. In total about 3,000 of the subspecies are localized to the B.C. coast, while the overall Canadian population is 4,000 to 5,000.

The birds are designated a special concern under the Species at Risk Act.

Dalyce Epp has been counting the park’s heron population since 2002. She said the camera idea has been tried elsewhere before, and so she’s game to see how it goes.

“Every year I’m afraid (the herons) won’t come back. So every year that they do, it’s really wonderful,” she said.

“To me it’s an affirmation of life.”

The streaming footage can be viewed at vancouver.ca/heroncam.