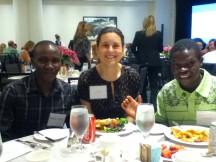 At SPES we like to support our local community and we were pleased to be part of the 2013 BMO Vancouver Marathon as one of the community charity partners.

In spite of the BMO Marathon organizers’ promises to deliver water and cups to the water station early in the morning, this never materialized. However the volunteers did a brilliant job of ferrying container after container full of water from SPES’ office on the second floor of the Stanley Park Dining Pavilion to the water station 200 meters away on Pipeline Road to avoid letting the runners down.

Thanks volunteers, you were absolutely brilliant!

PS: As you can imagine, we were way to busy this Sunday to get any pictures, but here’s one of Julie, SPES’ volunteer coordinator, in company with the two winners of the BMO Marathon, Thomas Omwenga and Benard Onsara, at a BMO event on Friday.