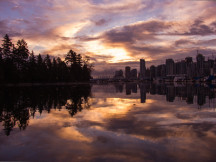 “Our goal is to work in partnership with Stanley Park Ecology Society to support their efforts towards education, ecological stewardship and conservation in Stanley Park,” says Andy Murison, Vice President of Marketing for Mark Anthony Brands. “The ‘Adopt An Acre’ initiative provides beer consumers in British Columbia with the opportunity to ensure Vancouver’s most beloved outdoor space remains beautiful, lush and green as they enjoy our hand-crafted Belgian-style beers from Stanley Park Brewery.”

SPES is an independent non-profit charity that relies on support and funding from local businesses and the community. For 25 years, their staff and network of community volunteers has played a leading role in the environmental stewardship of Stanley Park and in connecting thousands of local people of all ages with nature through school and public programs.

“We are grateful to Stanley Park Brewery for initiating the ‘Adopt an Acre’ program in an effort to educate people and make a real difference to wildlife and nature in Stanley Park,” says Patricia Thomson, Executive Director of SPES. “Our charity relies on the generosity of local businesses and we are delighted to partner with Stanley Park Brewery, a locally-owned family run business, that is focused on sustainability and committed to minimizing the environmental impact of their brewing process. “