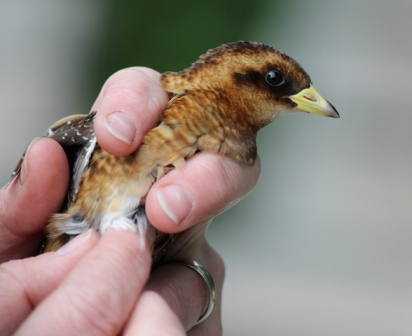 Exciting news for birders and nature enthusiasts in Vancouver – a new bird, the yellow rail, has been added to the city’s bird list.

This spring a local resident found a bird that was being attacked by crows near the Stanley Park Nature House on Lost Lagoon. The bird seemed to be temporarily stunned and allowed itself to be caught. On closer inspection by SPES staff, who are authorized to handle wild birds in Stanley Park, it was found to have suffered no injuries and was released a short time later at Beaver Lake, a much more suitable habitat.

On first glance the bird looked like a sora, which is the most common member of the rail family. However, it was also thought that it could be a yellow rail. It was determined that the rail was not likely as Vancouver is outside the normal range for that species.

Since reporting this incident in the ‘cool sightings’ section of the summer newsletter, bird experts from Nature Vancouver saw the slightly blurry photo and thought it may indeed be a yellow rail. They inquired with SPES and we happened to be able to obtain a new, clearer photograph from a filmmaker who was filming at Beaver Lake that day.  It has now been determined that this bird was indeed a yellow rail and that this is a first record for Vancouver. The sighting is now being added to Nature Vancouver’s bird list for the city.

“You are right, these are amazing photos of the Stanley Park Yellow Rail. This is a bird that has only been seen a small number of times in BC because of its limited range and secretive nature. Thanks for sending these new photos and thanks for taking care of the bird in the first place. You don’t know how lucky you are to have this experience”.