Over the past three days, a coyote has been sighted regularly during daylight hours near Malkin Bowl at the southern entrance to Stanley Park. Coyotes are naturally very timid creatures and tend to come out during the night, but one coyote in particular has taken to preying on the abundant squirrel population here in Stanley Park in the middle of the day. 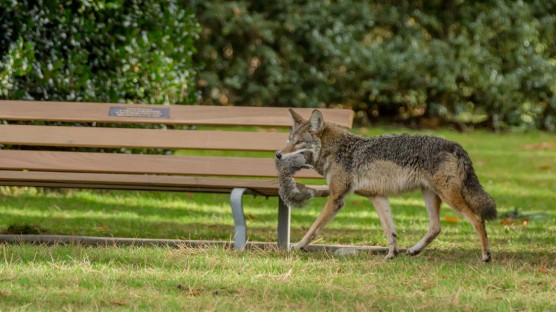 Coyotes have become common to every part of Vancouver since they were first spotted here in 1987, and they now live in cities throughout North America. Rodents make up most of their diet including rats, mice and squirrels, but coyotes will also make use of other sources of food like garbage, compost and small pets if available. Coyotes are generally not dangerous to people, but if food is involved they will quickly learn to be more comfortable around humans and that can lead to conflict.

“This coyote has not yet shown any interest in people or their dogs, but it isn’t very afraid of humans either,” according to Dan Straker, Co-Existing with Coyotes Program Coordinator with Stanley Park Ecology Society. “It is really important to make sure this coyote learns to be afraid of people again, before someone makes the mistake of feeding it.”

Straker encourages anyone that encounters a coyote to scare it by putting their arms over their head and yelling “Go Away Coyote” which also alerts other people nearby. Dog walkers should also keep in mind that Stanley Park is an on-leash area. A potential encounter with wild animals is just one more compelling reason to keep dogs on leash and closely supervised while walking through the Park.

For more information about co-existing with coyotes, visit the program page